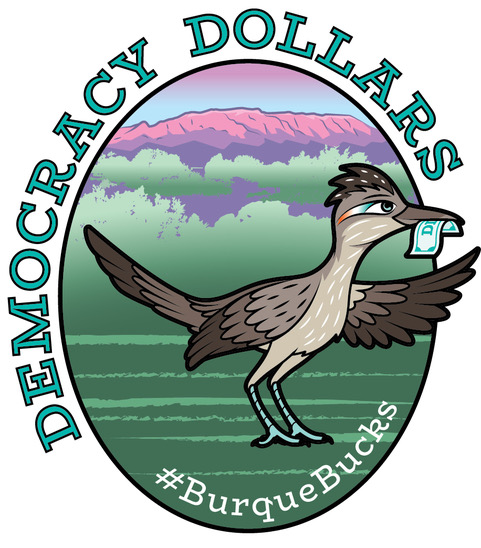 VOTE FOR PROPOSITION 2 on NOVEMBER 5!

Are you tired of big money deciding our elections?

Too many elections are often decided by a small group of secretive and rich political donors. They have all the power to decide who represents us, but it doesn’t have to be that way.

Democracy Dollars gives the power back to the people—at no extra cost to the taxpayer—by letting public candidates raise small contributions from regular people who normally wouldn’t participate in funding campaigns.

Today’s candidates pay too much attention to wealthy donors and not enough to regular people.

Democracy Dollars will help to modernize the city’s current public financing program because they will ensure that participating candidates from all parts of the city can run competitive campaigns based on the strength of their local support, not the size of campaign contribution checks.

Democracy Dollars gives candidates the freedom (and the incentive) to walk out of that high-dollar fundraiser and come knock on your door—for a real conversation about what matters to you. Every year, fewer and fewer candidates take public financing: they know it's gotten harder to win under the current structure, letting big donors’ voices are dominating the elections that should be determined by all of Albuquerque’s voters.

Seattle implemented a similar program in 2017 and all but one candidate in the general election ran with vouchers and small donations—that’s a program that works.

Albuquerque Donors Do Not Match the City's Diversity:
Democracy Dollars Can Make Every Voice Matter in Albuquerque’s Elections

A review of donations from individuals to mayoral and city council races in 2017 shows that those who contribute to campaigns, and therefore are more likely to have their voices heard, do not reflect Albuquerque’s diverse population. Instead, the donor class is whiter, older, and higher-income than the general population. As a result, people of color, young people, and middle- and working-class residents are underrepresented in the city’s politics and policies. Our elections are fairer—and our democracy works better—when politicians listen to the entire public instead of only to a few, unrepresentative big donors.

Together, blacks and Asian Americans make up 6% of Albuquerque residents, but only 2% of donors. 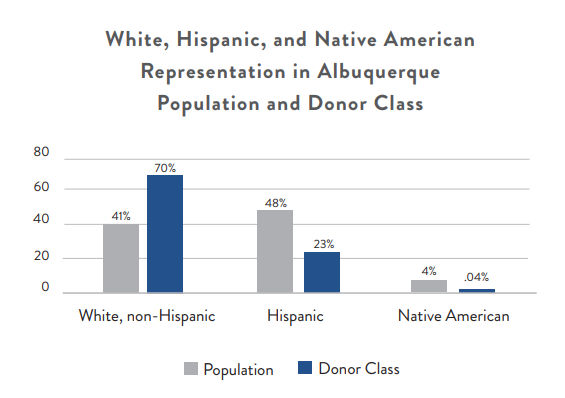 Under the current system, City Council candidates who take public financing receive $1 per voter in their district—usually around $30,000 to $45,000. Mayor candidates get $380,000. That sounds like a lot, but recent privately financed candidates have raised $1,000,000 or more.

It used to be the case that if a public candidate’s opponent raised more private donor money, the public financing fund would match it—that made it harder for anyone to, “buy” a victory.

But the U.S. Supreme Court struck down this type of matching over concerns of "burdening" the political speech of privately financed opponents.

Ever since then, the Open and Ethical Elections program that 70% of Albuquerque voted for has been weakened as the cost of elections has been increasing each year.

Candidates want to win, and to win, they need to communicate with their voters. 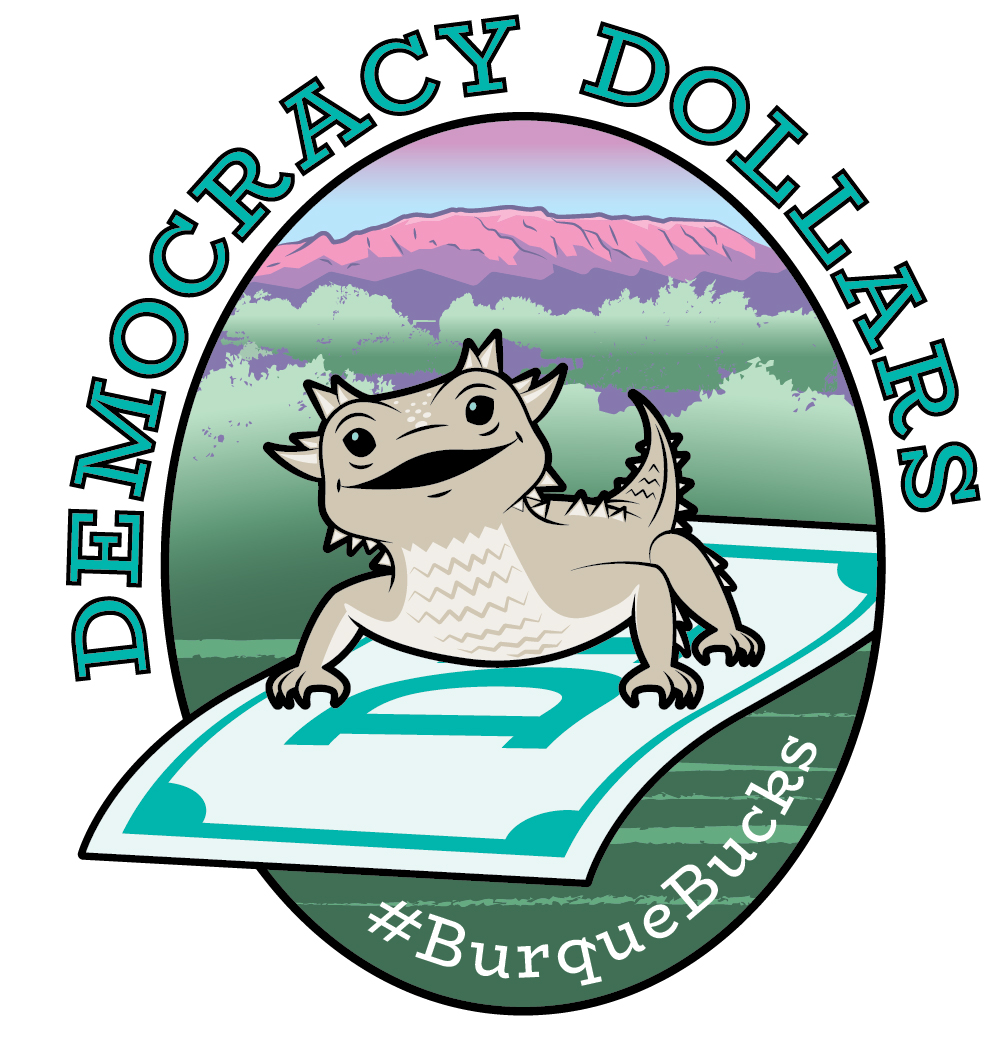 That costs money, so more often than not, the candidate with the most money can afford to spend the most on campaign mailers, robo-calls and canvassers and ends up wins the race.

The incentive for privately financed candidates here is clear: spend your time talking to wealthy donors, not to your voters—and with no matching funds to worry about, don’t take public financing.

Democracy Dollars is the solution because it gives candidates the freedom, and the incentive, to talk to the people again. Democracy Dollars makes the average Burqueno a real political donor and an ability to support the candidates who they believe in at a broader level.

How do they work?

Democracy Dollars are simple. Each coupon is good for a $25 contribution to a candidate you choose. Just give the coupon to the candidate you support, or fill it in and mail it back to the Clerk. No one else can use your coupon—it’s custom made just for you!

How do we pay for it?

There are no new taxes involved. The City sets aside about $500,000 a year for public financing, but currently, this money mostly goes unused because it was set aside for the now defunct “matching funds” part of the program. Democracy Dollars will be funded by the $3,000,000 surplus that has built up in the Open and Ethical Elections Fund and the annual allocations already in place.

Who gets to use them?

This program will be as inclusive as possible—just like elections should be! Registered voters will get coupons in the mail automatically. Eligible residents who aren’t registered get their coupons by applying to the City Clerk.

What candidates are eligible?

Only the candidates who have qualified to use the public financing program can redeem Democracy Dollars.

How much can candidates raise?

Democracy Dollars will be capped at the same level as the initial amounts publicly financed candidates can receive. A Council candidate who gets $35,000 to start can only get up $35,000 more in Democracy Dollars, a total of $70,000.

I lost my coupon. Now what?

There will be a process to retrieve your coupon, no problem.

What’s to prevent fraud or abuse?

Candidates using Democracy Dollars can only spend them on campaign activities as defined by City code. They report every dollar they raise and spend, so the City Clerk and the public can see where their money is going.

1. Eligible Residents Get Democracy Dollars In the Mail. If you’re registered to vote, this process happens automatically. If not, you can apply with the Clerk to receive your Democracy Dollars.

2. Candidates Qualify for Public Financing. To accept Democracy Dollars, candidates must qualify for the public financing program, by collecting a set number of $5 qualifying contributions and signatures.

5. Public Reports Provide Transparency. Each candidate files regular reports showing how many Democracy Dollars they raised—and how funds are being spent.